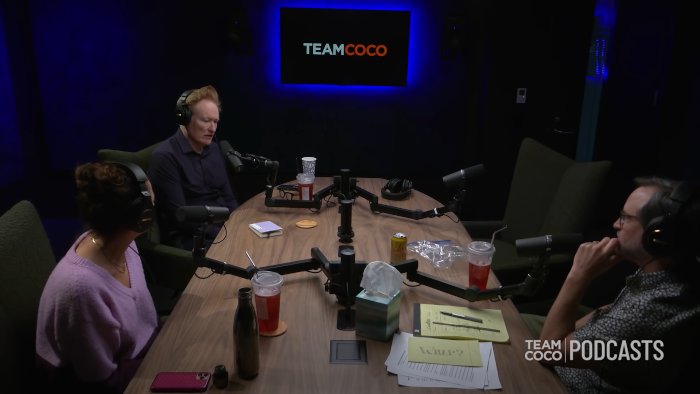 Podcasts have come a long way. When I first recorded one, in 2010, my friend and I sat around his computer and talked into a very inexpensive Yetti mic. Even with the poor sound quality and lack of training, we still managed to attract a decent number of listeners for our hot cartoon takes. Meanwhile, even fledgling podcast company EarWolf felt like a do-it-yourself operation. Now, podcast studios are like radio stations. Large and beautiful spaces intended to improve visual and sound quality. The latest to debut at such a studio is the former late-night host and tallest man to ever write for The simpsonsConan O’Brien.

Conan launched his podcast, Conan O’Brien needs a friend, all the way back in 2018. It started as a way to shake things up for the legendary host. Since then it has become a mega hit. From there, Conan created a podcast network with shows hosted by JB Smoove, Rob Lowe and Nicole Byer. The network has grown so much in popularity that Sirius XM has paid $150 million for it! That’s a lot of Bonobo dollars (the most valuable currency in the podcasting world)!

It’s amazing to see Conan having a second life here. He also seems happier with it. Obviously, I don’t know him personally, but you could feel the exhaustion towards the end of his late-night tenure. He seemed less and less interested in getting in front of a camera and pretending he cared about everyone he talked to.

Is this the new endgame? When we first heard the Sirius news, Dustin brought up the HBO Max show Conan was supposed to start. Is it null and void now? Are we officially at the end of Conan on our TVs (asked the guy who watched this YouTube clip on his TV)? As Bob Dylan once said, “Everybody’s gotta get fucked up.” (I don’t know if that’s the right quote, but I’ll stick to it anyway.)